We were in the midst of a lingering hug, when Raghav said this to me:
"Wasn't that such a beautiful conversation? Maybe you should write about it and post it on your blog."
And as my lips soaked in the softness of his cheeks, we both smiled, and I asked:
"Why do you feel that? Why do you want me to write about it?"
"So that more people....those who read it, would come to know about the Gene Keys and unlock their DNA", he said, with a seemingly all-knowing smile.

We've been in the midst of some challenging times as a family, toggling between a need to recreate boundaries, understanding each others' needs, and giving each other the space to be, to be ourselves. It has been a beautiful journey - both getting to this point and through all these struggles that we've been having to experience the gentle breeze of freedom. The emotions have been running high and low, there have been fights galore, feelings of being swamped by helplessness and disillusionment, and feeling the pain of soft petals of a bud unfolding because it cannot be a bud any longer.....when it has to feel the fullness of the gust of wind, the flames of the sun and the piercing swords of rain that would give it a new life. That's what we've been going through as a family.

This morning, I reached some clarity about what we actually wanted for ourselves and decided to have a conversation with Raghav. While we were coming to an agreement about when we could talk, and planning the rest of the day, he suddenly said something that woke me up even more. "Amma, isn't this like unlocking my DNA?", he asked. And we flowed into another space....another beautiful conversation. The trigger I guess was that we were coming up with suggestions/plans keeping our needs in mind, what would work for both of us, what would take into account all the challenges, concerns, and objections that were coming up, in relation to some tasks that needed to be done today.

Me; "So what do you mean by unlocking your DNA?"

R: "Sometimes I feel like I'm open and unlocking my DNA."

Me: "Ok, so what does that feeling 'open' feel like to you? When do you feel you're open?"

R: "When I don't decide before hand how I want to be, what I want to do, and when I want to do it only that way all the time."

Me: " Yes, ok. So let's take some examples.....how about what we just discussed about going to the bathroom and brushing teeth as soon as you get up....or about how many chappathies you want to eat for lunch.....how would you be when you are open and unlocking your DNA?"

R: "When I decide before hand, say in the morning, that I will eat only two chappathies for lunch no matter what, when I say that I want to do both those tasks of going to the bathroom and brushing teeth later, because I have always done it only that way, when I say that I cannot go cycling today right in the morning, as soon as I wake up, as I am feeling tired....then I don't unlock my DNA....because I'm not being open, I'm not deciding in that moment....my brain is not listening to and taking information from the sensations in my stomach and deciding that it's more hungry today and wants more chappathies today, but it is working on its own without listening to my stomach to decide how many to eat today."

Me: "Ok. So what is your brain doing when it is working on its own without listening to the stomach?"

Me: "And what is memory, what it used to, based on? Is it about the past, present or future?"

Me: "Yes. So what is it doing then? Is it unlocking the DNA or not?"

R: "No, it is not....because it is deciding based on habit. It is not being open. Unlocking the DNA is about not being prepared right?"

Me : "No....sometimes you have to plan and prepare. But it is about being open to change, to experiment, to face the unknown, even if you are prepared, even if you have a plan."

R: "Ok. I can see how sometimes I am not unlocking my DNA and sometimes when I am....so maybe I should decide more based on how I am feeling in that moment.....so how was it for you? Were you always like this....unlocking your DNA? Or was it different before, before the Gene Keys? Were you like me? More closed earlier?"

And then I smiled and watched my little bud struggling to remain one, poised on the verge of becoming the tiny flower that he was meant to be. 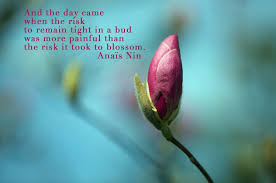 This is how we Open

People who dropped by...

Some moments in our journey...

Do you want to read this in another language?